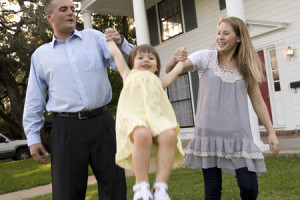 So many of you who’ve followed our story for awhile know about Andrew’s books, A Gray Faith and The Ellie Project, but before those books came along there was another book about football, the perils of high school popularity, and choosing God over what the world says will be fulfilling.

It was the winter of 2005 when I was introduced to Andrew. I had just invited him to go country western dancing with me for my sorority event, which happened to be on my 20th birthday. We had a really great time and it was on the drive home that I felt a deeper connection with Andrew that really sparked my interest in getting to know him better. We were sitting in the back of an SUV when he leaned in and shared his story with me. He had been the star quarterback of his high school football team with dreams of playing college football, and multiple offers to play, when he got the news that he had stage 4 cancer (Hodgkin’s lymphoma) at the ripe age of 18. During his battle with the disease, he thought God told him he was going to die, so he made a deal with God that he would do whatever God wanted him to do if He would let him live.

After months of chemo and radiation Andrew beat cancer (for the time being), went on to play football for Texas Tech, started an on-campus Bible Study that continued to multiply, and shared his story at Disciple Now events within the Baptist church and churches across Texas. Andrew eventually felt called to Seminary to become a Pastor. It was also on that drive home he told me he had recently written a book and wanted to know if I wanted to read the manuscript over Christmas break. I devoured the book and felt instantly closer to Andrew through getting to read his life’s journey up until that point.

This book is called Your Best Life Later. It’s honestly an amazing book, especially if you love football and can relate to experiencing times in your life when it was challenging to keep to God’s plan. I remember how, once Andrew and I were dating, I would travel with him to do Disciple Now events for high school students. He was always the main speaker and I was a group leader. During these events, Andrew would share his story about his battle with cancer, however it became difficult for me to hear his testimony about what he went through because of a certain part of the story that he would share.

It was the part about his love for his high-school girlfriend (oh, the insecure days…so fun. Poor Andrew). I would literally leave the room when he talked about his high school girlfriend because I felt too sensitive to listen to it. At the time, it was difficult for me to hear the man I loved talk about his first love. These days, however (thank goodness for maturity and growth), I’m singing a different tune. I would love to talk to her about who he was in high school because I want to hold on to every part of him at every stage of his life. I often think of her when I hear the country song, “I Got the Boy,” by Jana Kramer. In it, Kramer sings, “I got the boy, she got the man.” It speaks to the fact she and I each got to be a part of the different stages in Andrew’s life. She was with him during his first battle with cancer and I was with him during his second battle. She knew him as a boy and I got to know him as a man. It might sound cheesy, but…I’m kinda cheesy.

Andy didn’t have a lot of money to put into his first book and since it is such a great book, I wanted to get it re-edited by my fabulous editor, Julie Kragen, and to re-design the cover. I’m excited to bring it with me when I speak and to have it available online. I’m just now getting to a place emotionally where I can read back through Andrew’s books. Sometimes I feel like he was the brains and I’m the heart, and together we can continue to co-create, making the world a little better in our own way. Keep a look out for Your Best Life Later coming this winter! Feeling extremely thankful for you today! Blessings and love.

PS – Can’t wait to share my family’s story and spend time with the MOPS Inc. Group in Forney, TX this Friday! So thankful for this great opportunity to empower, inspire, and encourage women going through life’s ups and downs.

4 Responses to “The Other Book”

I have been blown away with what I have been left with at the end of each coaching session with Bailey. I have been encouraged in a powerful way and come away with more clarity, inspiration, and focus. It is hard to express with words what this coaching experience has meant to me but I am grateful for all of the valuable heart change that has happened and would recommend Bailey to anyone looking for a life changing experience.