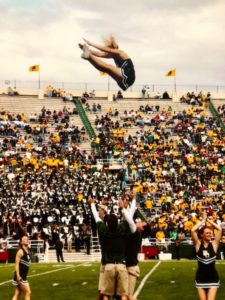 Last week I was about to resume watching The Office on Netflix, and instead of selecting The Office, I accidentally chose a show called Cheer. I was just about to change it back to The Office when I suddenly got sucked into the storyline.

Having a cheerleading background, I was immediately taken back in time to my years as a collegiate cheerleader at Baylor.

Before becoming a cheerleader, I was a competitive gymnast training four hours a day, five days a week, from age 9-14. Then I switched over to cheer when I went to high school, where I competed and won an individual national championship in Florida at the Fellowship of Christian Cheerleaders (FCC) national competition. Our team won second place that same year!

I also did competitive cheerleading outside of school for a year, where my team won several championships. I taught cheer camps overseas in the Czech Republic, traveled the country teaching cheer camps for FCC, and then became a Baylor Cheerleader on the coed cheer squad from my freshman year through the fall of my senior year.

After graduating from Baylor, I became a JV cheer coach and then a Varsity cheer coach at my high school alma mater, coaching tumbling lessons on the side at a local gym and then creating my private cheer coaching business, which, I LOVED.

Cheerleading opened doors for me to see the world and create lasting memories. One of my favorite memories was getting selected to cheer on the Oprah Winfrey show. Another favorite moment was getting to cheer at the game where our Baylor Lady Bears won the women’s national basketball championship in Indianapolis. Such incredible experiences.

I’ll never forget how I felt after deciding not to cheer for basketball season my senior year at Baylor.

I’d just gotten proposed to and said “yes” and figured I’d devote the final semester of school to spending time with my fiancé, planning a wedding, and preparing for the “real” world.

Then it hit me; I would never cheer again.

Suddenly I felt like a piece of me was missing. The feelings overwhelmed me and shocked me because, at the time, I didn’t realize how deep-rooted my identity was in being a cheerleader.

I’d worked hard most of my life to be good at this one thing, and now none of it mattered because it was instantaneously over. I wondered if I would ever be as successful at anything the way I was at cheer?

I felt lost, overwhelmed, and depressed. Now I had to start all over, and it felt like none of the skills for which I worked so hard were transferable.

In the Cheer documentary, they talked about how there isn’t much opportunity for cheerleaders to cheer after college, and how that reality can be a hard transition for a lot of people. I resonated with this piece of the documentary because that’s exactly how I felt, and I appreciated that perspective because it made me feel less alone.

The truth is, it’s been a process to find my place in this world as an adult. Heck, I’m still on the journey. I’ve come a long way and learned a lot over the years. I’ve tried many different careers, and it wasn’t until I lost my husband and turned my pain into a purpose that I found myself again.

I found my determination, my spark, my passion, and my enthusiasm for life. I reconnected with the performer who’s been inside me from birth. The little girl who just loved to dance and sing and make people smile.

I learned not to push away or grow out of the passions of your youth, but to embrace those things as a part of who you are. Don’t apologize for them, own them, and share them with the world.

Through speaking, storytelling, coaching, and writing, I’ve found my voice and have been able to carve out my lane. I’ve accepted I love to perform and it is vital for me to have outlets for that expression, so I make it a priority to take classes like acting and improv. My next step is voice lessons with my daughter.

What are the elements of yourself that have been inside you from childhood that you felt you had to put on the shelf to grow up?

I encourage you to find outlets for those gifts, interests, and curiosities because they are inside of you for a reason, and regardless of what anyone tells you, you don’t have to let those things go. Find constructive outlets to express those gifts. Doing this for myself has been essential to my wellbeing.

Thank you so much for spending time with me today! So thankful for your presence. Blessings.