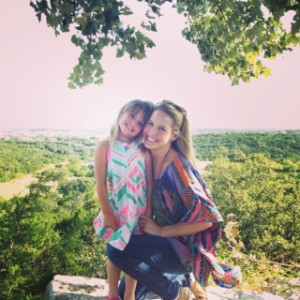 What would you say is the number one thing that holds you back from taking hold of the life you want?!

For me, it was ultimately what others might think about me: Would I fulfill their expectations, would they judge me harshly, would I be misunderstood…maybe I would offend someone and then no one would like me! Whew…Can you relate?

I want to share with you an experience that set me free. It freed me, to a great extent, from the need to gain everyone’s approval, and allowed me to focus instead on seeking my own. It has been one of the largest areas of personal growth in my life and has had a profound impact on moving me closer to the kind of woman I desire to be. Granted, I’m still very much a human being, and like everyone, I have my rough patches, but now I spend much less time stuck in a state of self-doubt and more time courageously sharing from an authentic place.

Almost immediately after Andrew found out that he was re-diagnosed with cancer in 2012, his focus immediately shifted toward how he was going to spend his possible final days on Earth. As his wife, I’d always seen Andrew as a big dreamer and visionary, and I was also keenly aware of some of the fears that held him back from fulfilling those dreams. Observing Andrew during the short 10 months he had to live, I noticed a completely different man. All those fears that, at times, had held him back and prevented him from taking action? Completely gone. Anything that could’ve stopped him had dissipated 100% and he was laser-focused on the present and making the most of it.

Like me, I think Andrew had a degree of fear of what others would think if he wrote his honest thoughts and opinions and let them be heard. I saw his true calling emerge during those last 10 months and a liberated, uninhibited side of him came out. Some of his work was met with criticism and negative feedback, but it didn’t matter anymore. He didn’t care. He knew those who were meant to be touched by his message would be and that truth was his main focus.

Watching Andrew be brave, bold, and care more about being his unique self and sharing his specific message with the world, while he had the opportunity to do so, pushed me out of my comfort zone and inspired me to do the same. I’m still sensitive and can slip back into the habit of caring too much about what others may think of me. BUT, when those moments come, I recall the experience I shared above and it helps me get back on track with my own mission.

Like my mom used to tell me growing up, “People don’t think about you nearly as much as you think they do.”

So what about you?

Does thinking about what others may think of you stop you from taking action? Are you giving away your power and the time you have left to those who may not really care about what you do or not do, after all? Do you feel held captive to other’s opinions and judgments and aren’t sure how to let them go?

I feel your pain because I’ve been there and it’s paralyzing.

As a coach, I’ve helped my clients break free from the chains of expectations and move into the freedom of being themselves and speaking up authentically (while being mindful and aware, of course!). I love supporting them in creating their unique, clear mission and then giving them the push they need to take action and live a more fulfilling life NOW.

Last week, I shared five complimentary Next Chapter Discovery Sessions in celebration of completing my Life Coaching certification. They filled up really quickly so I thought, why not? Let me offer up five more spots! Click here for your free session!

So honored to be on this journey with you. Live boldly, make your time matter, and take steps toward your dreams today! Love and Blessings.

P.S. Excited to be in Cuero, TX tomorrow, Thursday, July 23rd, doing an Ellie Project (www.ellieproject.com) Book signing at Lakeview Knoll (city park) at the pavilion from 7:00-9:00 PM! Hope to see you there!

P.S.S. Last night El and I did a follow up story with Fox 29 in San Antonio. It’s a beautiful tribute to Andrew’s legacy and to The Ellie Project! You can watch it here.  https://www.youtube.com/watch?v=k-IGw_jb1DY