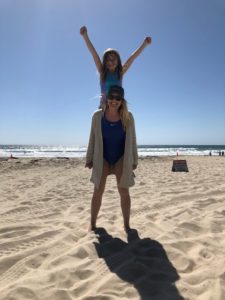 These three words changed my life eight years ago. A seed was planted.

I was pregnant with Ellie, selling real estate, and seeking guidance on what I wanted to do with my life when I hired Christine Hassler, a life coach out of Los Angeles. I’d read two of her books, followed her blogs religiously over the past few years, and eventually saved up for months to afford her coaching services.

Every session was transformational, and one in particular set me on a life-altering journey. She asked me if anyone had ever told me I was creative. I said, “No, I’ve never considered myself to be creative.”

I told her I was always fascinated by, envious of, and drawn to creative people growing up. In fact, I consider some of my closest friends to be highly creative. She told me we are drawn to that which we are.

Still not seeing it, I pushed back by saying, “I’m not good at drawing, painting, scrapbooking, sewing, crafts, decorating, styling, cooking…” That’s when she opened my worldview by telling me creativity is so much more expansive than I had thought.

Her assertion got me thinking about all the ways my creativity may have manifested itself throughout the years. When I really gave it some thought, I started to notice:

The more I thought about it, the more clearly I could see I was a highly creative person.

It hit me I’d spent most of my childhood in my imagination, getting lost in books, pretending to be the characters I watched in movies (like when I’d jump off my couch, turning cartwheels and roundhouse kicking like Buffy the Vampire Slayer, circa 1992), or making my own music video singing a Dixie Chicks song.

What I remember most about elementary school was gazing out of the classroom window, daydreaming about being an Olympic gymnast, or some famous singer or model. My head was constantly full of dramatic stories and ongoing narratives. I realized I’ve always been happiest inside my imagination.

This revelation, which was brought about by the aforementioned conversation with Christine, changed the trajectory of my life and connected me back with who I’d always been, but somehow forgot along the way.

For most of my adult life I’ve felt like a fish out of water, unsure of where I belong, trying to fit the mold of a 9-to-5 job or a conventional life, and it just doesn’t work.

I always thought something was wrong with me because I didn’t dream about having the life it appeared most people aspired to, and I always felt bad, guilty.

Recently, I began reading this transformational book called The Artist’s Way, which is about recovering your sense of creativity. I picked up this book in the first place because the books I was reading by prolific actors, writers, singers, and artists all attributed breakthroughs in their creativity to this book. I wanted to see what all the fuss was about, and it’s impacted my life in a powerful way.

Eight years ago, when Christine told me I was creative, I didn’t know what to do with the information, so I didn’t do much— until Andrew got sick and I felt I had to write about the experience.

Starting my blog was my first taste of embracing my creativity as an adult. The Artist’s Way has helped me to understand my creativity comes from God and that’s why I feel closest to Him when I’m in the flow of creating.

So what about you…

Over the next few weeks, I’ll be diving even further into the topic of creativity!

As always, thank you for spending time with me today! So grateful to be on this journey with you! Love and Blessings.

PS — This past weekend, Ellie and I went to San Antonio, TX, to speak at TEXMED, the annual meeting of the 50,000-member Texas Medial Association. We went with my late husband, Andrew Heard’s, dad, Dr. Mark Heard, and Andrew’s brother-in-law, Dr. Eric Moore. We were all speaking on the topic of Grief. This was the first time Mark’s spoken of Andrew’s death in public and I knew it would be very emotional. It was such a gift to be able to speak on the same stage as my family, and the entire experience brought about some powerful shifts in some personal limiting beliefs that I’m excited to share more about in next week’s blog post! Stay tuned.

I have been blown away with what I have been left with at the end of each coaching session with Bailey. I have been encouraged in a powerful way and come away with more clarity, inspiration, and focus. It is hard to express with words what this coaching experience has meant to me but I am grateful for all of the valuable heart change that has happened and would recommend Bailey to anyone looking for a life changing experience.