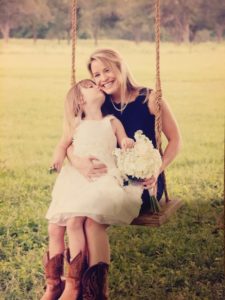 In last week’s post, I shared how grief hit me hard last year. Since Andrew’s passing four and a half years ago, I’ve been in survival mode, on autopilot, staying busy while subconsciously hoping to escape the depths of grief.

But grief eventually caught up to me and knocked me flat on my back. When I got sick, I was forced to be still, which seemed to deepen the level of grief I experienced. I was faced with learning to embrace the discomfort, pain, fear, and, ultimately, the gravity and reality of our loss.

Coming through the other side of such a challenging year I now feel grateful for the gifts inside the pain because they were transformational in shifting my paradigm on life and grief.

Before this experience, I didn’t really understand what grief was.

I associated it with all negative emotions. I also felt a deep resentment toward grief because it was a club I hadn’t chose to belong to, but was instead thrust into and given a label and stereotype to go along with it.

Often, I’d get emails asking me which books I recommended on grief and I didn’t really have answers because I had no desire to read a book on grief.

I attempted listening to the infamous Dr. Elizabeth Kubler-Ross’s book, On Death and Dying, but I couldn’t get through the first chapter because reading it took me to such a sad place. I remember spending countless therapy sessions asking my therapist what was wrong with me and why I wasn’t grieving like I thought I should be.

Looking back, I realize it’s always taken me a while to process things, people, and experiences. Because I process over time, I tend to grieve long after the event, dream, or person is gone, instead of in anticipation of or immediately after the loss. I’ve found my grief to be cyclical in nature, as opposed to a one-time event.

I’ve learned everyone is different in how and when they grieve. Although as hard as I tried to ignite my grief early on after Andrew’s death, it wasn’t something I could force to happen—it had to happen organically.

In the middle of last year’s struggles, I somehow stumbled upon the book, Option B, by Sheryl Sandberg and Adam Grant. It’s a book about moving forward after loss, and for the first time I was ready to receive the information it contained.

I found it comforting and helpful. It was a step to me being open to my own grief, which has allowed me to move toward acceptance.

Another step was building friendships with other widowers. Our conversations are so meaningful to me because I’m listening to someone who shares similar challenges and I’m able to connect to how they feel about and deal with those challenges. I can see patterns in their life that are similar to my own, which gives me more compassion and understanding for myself and for others.

Taking the first steps, such as reading a book on loss or talking to someone who’s gone through a similar journey, while being willing, open, and brave enough to explore my own grief has been transformational. It’s moved me closer to acceptance, which has paved the way for a new beginning and a re-entry back into life, as well as hope for my future.

Next week, I’ll be sharing some ways I’m building a strong foundation for my new beginning. Thank you so much for spending time with me today! Love and Blessings.

4 Responses to “Moving Through Grief”