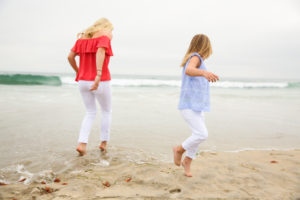 I walked out of the doctor’s office with a huge smile on my face, waving goodbye to the staff who now all knew me by first name. Understandable, since I’d been in and out of their office for the past seven months. And not just my general practitioner’s office, but also the four other specialists’ offices trying to figure out what the heck was going on with me.

It all started with chest pains back in January, which were eventually diagnosed as acid reflux, but I was convinced it was more than that. So I persistently kept going back to the doctor’s office to try to figure it out. I think some of my family thought it was all in my head, which hurt my feelings, but I knew my body and something was off. By the middle of June, my chest and back were in so much pain I could barely get out of bed. I had lost my appetite, which caused me to lose weight like crazy, my hair was falling out, I had no energy and could barely climb a few stairs without being winded, I had night sweats, fevers, and a cough that made a deep rattling sound inside my chest.

An x-ray reveled I had pneumonia, which eventually went away a few weeks later, but I still wasn’t feeling well. They ran all kinds of tests on me and found my iron was really low, which explained why I was so exhausted every day. They also found extremely high levels of inflammation in my body, but they didn’t know where it was coming from. My doctor referred me to a Rheumatologist immediately, who thought I might have Tuberculosis, Pericarditus (inflammation around the heart), or Lupus (autoimmune disease). He did a ton of blood work and told me he’d see me in two weeks for the results.

During those two weeks, I slowly, suddenly, and, in my eyes, miraculously started feeling like myself again. My appetite came back, I had enough energy to want to exercise, my cough began to disappear, and my chest and back started feeling better. When I arrived at the Rheumatologist’s office to hear my results, I found out I tested negative for all the possible diagnoses, yet my level of inflammation was through the roof and my iron was low. I asked the doctor to re-test my inflammation and iron because I was starting to feel better. My phone rang at 7 AM a few days later and my inflammation and iron levels were normal again. I can’t begin to tell you the relief I felt in hearing this news confirming I was on the mend. The doctors still don’t know what caused these issues to occur, and we are all praying that whatever it was doesn’t come back.

I tear up thinking about how grateful I am to feel well again. I didn’t know what it was truly like to appreciate feeling well until I felt bad for so long. This season has brought me to my knees because, at times, I felt helpless, alone, misunderstood, overwhelmed, afraid, confused, discouraged, depressed, and anxious. The past seven months have been an emotional roller coaster that threw me for loops, forcing me to rethink many different areas of my life. Ultimately, it’s turned my focus back to the Lord, trusting His plan and knowing He is in control. Sometimes we have no idea why we are going through the challenges we are going through, yet the one thing we can rely on is God has a plan for each of our lives. He is love and we can trust Him. “He will cover you with his feathers and under his wings you will find refuge. His faithful promises are your armor and protection.” –Psalm 91:4. Love and Blessings.

PS- My thoughts and prayers have been with all of those affected by Hurricane Harvey. Recently, one of my dear friends/college roomates, Megan, took in a dog rescued from the hurricane. His name is Harvey. Ellie and I went over to meet him, and it was love at first sight for my Ellie. 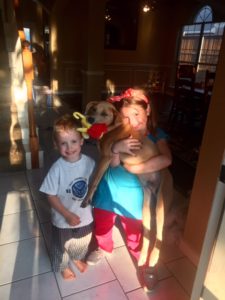 One Response to “WELL”